Online Desk : The legendary physician Dr Edric Baker, popularly known as the ‘Doctor Vai’, dedicated his entire life for the treatment of poor people of the Kaliakair village in Tangail’s Modhupur Upazila.

He breathed his last at the age of 74 in 2015 at his own hospital at Kaliakair after serving 32 years at a stretch. He repeatedly denied taking better treatment in Dhaka though he was suffering chronic diseases. 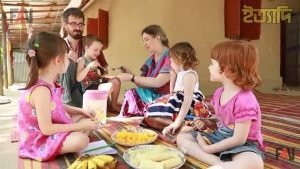 His well wishers wanted to treat him in Dhaka. He did not agree as his last desire was to leave his last breath in the hospital that he built.
Dr Baker also urged Bangladeshi doctors to take the charge of his hospital after his death. But no one from Bangladesh ventured out to serve for the humanity.

A doctor couple from USA, Dr. Jasine and Dr Merindy, came to take the charge of Baker’s hospital at last.

Jasine once visited the hospital while Baker was alive. He was upset after hearing the news of death of Baker but could not come due to his business there. Finally, he left his country America and moved to Bangladesh in 2018.

The couple is here with a vision to dedicate their life in treating the poor patients. They came here along with their four children. The couple has four daughters and all are admitted to the village school.
After Dr Baker’s demise, Dr Jasine is now the new ‘Doctor Vai’ where Dr Merindy is known as ‘Doctor Didi’. They are both serving regularly with great enthusiasm in the hospital. They find happiness in serving for the destitute.

The story of this great couple came to the light after a video clip on their life was published in entertaining magazine programme ‘Ittadi’ recently.