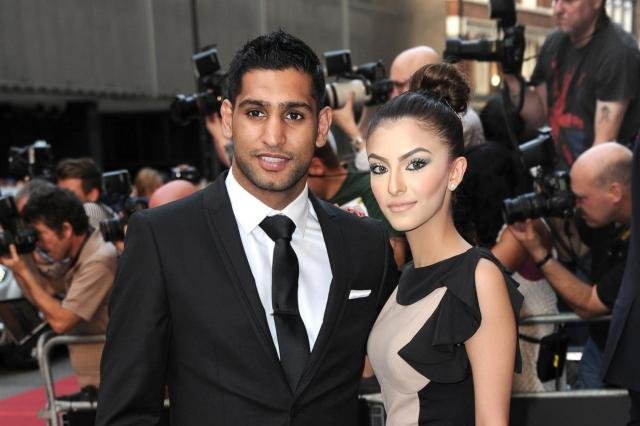 Amir Khan has announced he has split from his wife in a series of explosive tweets which seemingly accuse her of ‘moving on quickly’ with fellow boxer Anthony Joshua.

The former Olympic star posted five tweets from Dubai in which he declared he is “making it public”, including a screenshot of text messages.

It would appear the tweets were genuine after his wife Faryal Makhdoom Khan hit back, saying the boxer did not need to post “stupid tweets”.

After both had been on lengthy rants, world heavyweight champion Joshua spoke up to deny the allegations.

Khan, 30, began by writing on Friday afternoon: “So me and the wife Faryal have agreed to split. I’m currently in Dubai. Wish her all the best.”

He then posted another tweet, including Joshua’s handle, which read: “Faryal moved on quick. Always mentioned to me how much she wanted to be with another guy, from all people another boxer.”

Khan added: “Lol moved up in the weight classes lol. Trust me I ain’t the jealous type. No need to send me pictures of the men your talking to.”

Left my family and friends for this Faryal. I’m not hurt but another fighter. I’m making it public. You getting the divorce.”

He signed off by referencing undefeated Joshua again, saying: “Mans like Joshua can have my left overs!”

But Faryal, a model and the mother of his child, was quick to respond on Twitter, telling her followers: “I’m sorry to all the fans & family hurt by this. But amir did not need to do stupid tweets accusing others when he’s in the wrong.”

“I think he just needs some attention because boxing hasn’t been going well for him so he’s just been acting up.”

Joshua himself took to Twitter after reading the couple’s fiery tweets, saying “it wasn’t me” in reference to the smash hit song by Shaggy.

Khan, from Bolton, won silver at the Olympic games in Athens in 2004. Joshua, 27, from Watford, is an Olympic gold medallist and remains undefeated in his professional career.

Faryal later claimed that her account had been hacked, only for Khan to record a SnapChat video saying it was “all real”.

He said: ‘Everything you saw on social media, it is real. Obviously, me and Faryal have decided to move on and I have decided walk away.

‘Nothing has been hacked. We have to move forward it’s not healthy for any of us. I’m just not happy with the way I get treated by her.

‘I wish her all the best in the future.

A Khan family source told MailOnline: “Amir and Faryal have split up. It’s over. There have been problems in the relationship for a long time and they were headed for a separation. It’s the best outcome.”

The Standard has contacted representatives of Khan and Joshua for comment.#Source#ES#