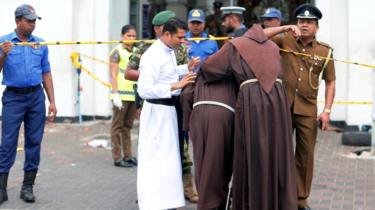 At least 137 people have been killed and hundreds more injured in explosions at churches and hotels in Sri Lanka, police and hospital sources say.

At least six explosions have been reported. Three churches in Kochchikade, Negombo and Batticaloa were targeted during Easter services.

The Shangri La, Cinnamon Grand and Kingsbury hotels, all in Colombo, were also hit.

Easter Sunday is one of the major feasts in the Christian calendar.

Reuters quoted a police source as saying more than 50 people died in Negombo, while hospital sources in Batticaloa said at least 27 people had died there.

A hotel official at the Cinnamon Grand, near the prime minister’s official residence, told AFP the explosion there had ripped through a restaurant, killing at least one person.

President Maithripala Sirisena has issued a statement calling for people to remain calm and support the authorities in their investigations.

PM Ranil Wickremesinghe is chairing an emergency meeting. He said: “I strongly condemn the cowardly attacks on our people today. I call upon all Sri Lankans during this tragic time to remain united and strong.”

On Twitter, Finance Minister Mangala Samaraweera said the attacks appeared to be a “well-co-ordinated attempt to create murder, mayhem and anarchy” and had killed “many innocent people”.

Another minister, Harsha de Silva, described “horrible scenes” at St Anthony’s Shrine in Kochchikade, saying he had seen “many body parts strewn all over”.

No group has yet said it was responsible for the attacks.

There have been fears that Islamic State group fighters returning from the Middle East could pose a threat in the country.

In the years since the end of Sri Lanka’s civil war in 2009, there has been some sporadic violence, with members of the majority Buddhist Sinhala community attacking mosques and Muslim-owned properties. That led to a state of emergency being declared in March 2018.