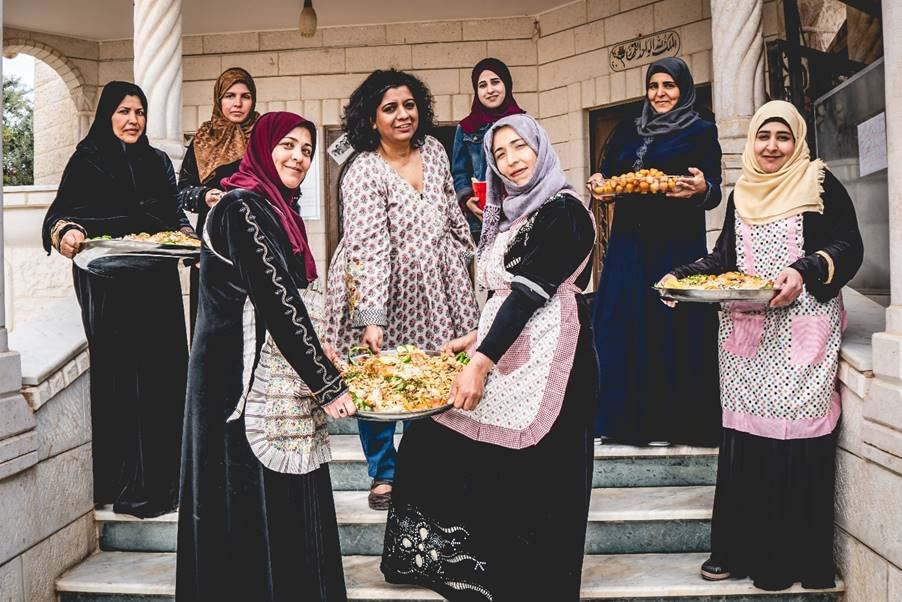 Celebrity chef, Asma Khan, visited Jordan with Islamic Relief UK to highlight the charity’s annual Ramadan campaign and to cook with Syrian refugee women who are due to receive Ramadan food packages from the charity during the holy month, which starts on Sunday 5 May.

Asma, who runs a highly successful Indian restaurant in central London and is the first British chef to appear on the Emmy-nominated Netflix show, Chef’s Table, visited the warehouse where thousands of food boxes were being prepared so that vulnerable families, including refugees, can break their fast during Ramadan.

She also met and cooked with a group of Syrian women who are being supported by the charity to deal with trauma and understand their rights.  All the women Asma met had fled their homes, had lost or been separated from loved ones and are now struggling to survive without any real means to earn an income or support their families.

Asma Khan said: “It was a truly humbling experience, and very special to cook and share food with women who’ve been through so much. When I moved to Britain from India, I missed home so much. Cooking meals from home helped to ease the pain. So, I know what food means when home is a place you cannot go back to. There is this deep longing and food becomes this balm that you need to heal your soul and I wanted to see how it affects people who’ve left home because they had no choice.

“The whole experience deeply moved me – we laughed together, we cried together, and we sang songs together too. Despite all they had been through, these women had so much strength. Their will to live, to survive, was impressive.”

This year, Islamic Relief is distributing over 135,800 large food parcels, across 35 countries benefiting more than 800,000 people. The food helps Muslims to break their fast at the end of each day during the holy month of Ramadan. The food parcels, which feed a family of five for up to one month, are tailored to local tastes and cuisine. For example, the food parcels in Jordan include Tahini sesame paste and halva, traditional favourites in the Middle East.

Asma said: “Ramadan is a very special month. It’s vital that families have enough food because it is so important that everybody eats together. When you no longer have the means to cook traditional dishes because of changed circumstances, you still have that desire. This is how these women grew up breaking their fast. It’s very hard not to do it in Ramadan and every family will try their very best. So, having a pack like this allows them to do that.”

“Ramadan is the most important part of the year for us at Islamic Relief, so we are delighted that Asma saw for herself how crucial our work is for some of the most vulnerable people in the world, particularly vulnerable and marginalised refugee women. Millions of people are living in desperate circumstances, exacerbated by conflict and climate change and we need to do everything we can to provide solace to them. Our mission is to change and save lives.”

Islamic Relief’s Ramadan campaign receives a huge boost from the UK Government, which will match £2m of the total raised for this year’s appeal. The £2m of matched funding will be spent on a programme in Ethiopia which aims to ensure that farmers can access water for their livestock and their families. This support is vital, as the area is suffering from frequent and severe droughts as a result of climate change.

Asma Khan concludes: “I saw for myself just how much Islamic Relief is making a difference to people’s lives in Jordan , so I hope this year’s Ramadan Appeal makes as much money as possible to help change and save lives in Ethiopia, Jordan and other countries in need around the world.”   .