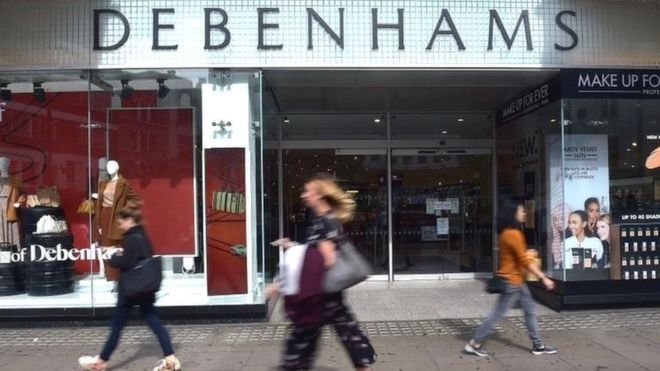 Control of Debenhams has fallen into the hands of its lenders as part of an administration process.

Debenhams has 166 stores, which will initially continue to trade, although about 50 branches had already been earmarked for closure in the future.

The department store rejected last-ditch rescue offers from Mike Ashley’s Sports Direct, which has been locked in an acrimonious battle for control.

Its lenders are made up of High Street banks and US hedge funds.

These include Barclays and Bank of Ireland, as well as Silver Point and GoldenTree.

The administrators said the lenders would now look to sell the business as soon as possible.

Debenhams has passed through a pre-pack administration process. This lets a company sell itself, or its assets, as a going concern, without affecting the operation of the business.

The lenders now take control of the business and will look to sell it on, and shareholders lose their investments.

It means that Mr Ashley’s near 30% stake in the company, which cost about £150m to build up, will be wiped out.

Debenhams employs about 25,000 people. As well as the planned closures, it has also been renegotiating rents with landlords to tackle its funding problems.

It has not released a list of which shops may be shut.

In February, it was revealed that the closure of 20 stores could be brought forward if the retailer took out a company voluntary arrangement (CVA), a form of insolvency that can enable firms to seek rent cuts and close unwanted stores.

The company explained that its restructuring plans would continue and that, if approved, they would “result in a significant overall reduction in the group’s rent burden and underpin a sustainable future”.

The stores will continue to trade as normal and administrators have confirmed to the BBC that customers will be able to spend any gift cards that they already have.

What has Debenhams said?

Debenhams chairman Terry Duddy said: “We remain focused on protecting as many stores and jobs as possible, consistent with establishing a sustainable store portfolio in line with our previous guidance.

“In the meantime, our customers, colleagues, pension holders, suppliers and landlords can be reassured that Debenhams will now be able to move forward on a stable footing.”

A spokesman for the company’s pension schemes said the schemes had been transferred to the newly incorporated company. “Members can therefore be reassured that the schemes are carrying on as usual.”