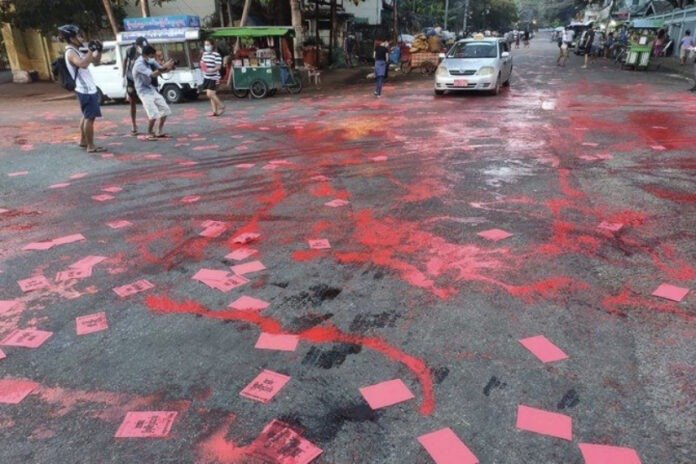 Myanmar’s own ambassador to the United Nations has urged “strong action” against the junta, as reports emerged of scores killed in the military’s latest crackdown.
The country has been in turmoil since the military ousted civilian leader Aung San Suu Kyi in February, with protesters refusing to submit to the junta regime and continuing to demand a return to democracy.
With more than 600 people killed by security forces trying to quell the movement, the international community has increasingly raised the alarm on the crisis.
During a UN Security Council meeting on Friday, Myanmar’s ambassador pushed for more concrete action – proposing a no-fly zone, an arms embargo and more targeted sanctions against members of the military and their families.

An independent analyst with the International Crisis Group also warned the council that Myanmar was “at the brink of state failure.”

China and Russia wield veto power at the Security Council and generally oppose international sanctions.
However, Beijing – the top ally of Myanmar’s military – has voiced growing concern about instability, and has said it is speaking to “all parties.”
There have been reports that China has opened contact with the CRPH, a group representing the ousted civilian government.
At least 618 civilians have been killed in the military’s crackdown on protests, according to the Assistance Association for Political Prisoners, a local monitoring group.
Efforts to verify deaths and confirm news of crackdowns have been greatly hindered by the junta’s throttling of mobile data within the country – effectively shunting most of the population into an information blackout.
News emerged Saturday morning of more violence in the city of Bago, 65 kilometers (40 miles) northeast of Yangon – the site of a day-long crackdown that forced residents into hiding in nearby villages.
AFP-verified footage shot early Friday showed protesters hiding behind sandbag barricades wielding homemade rifles, as explosions could be heard in the background.
A resident said that the military crackdown killed at least 40 protesters, and authorities refused to let rescue workers remove the bodies.