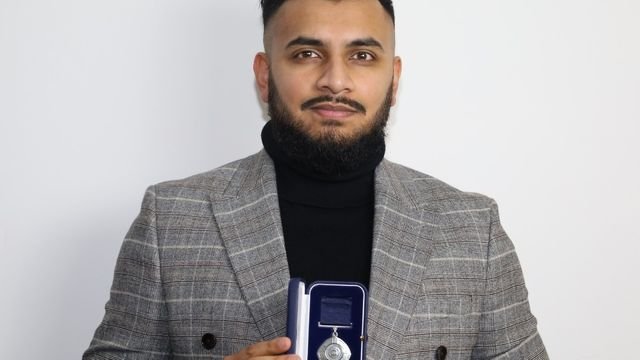 The man who kick-started Wapping youth football club and dipped into his own pocket to keep it going when it faced debt has been awarded a British Citizen people’s award.

Nahimul Islam has been recognised as one of Britain’s 50 “exceptional people” in 2020 who’ve had an impact on their community and made a difference.

His youth projects take teenagers off the streets and keep them busy during the Covid emergency such as painting a giant mural as a tribute to frontline NHS Covid medical staff which went up on a wall in Wapping.

He was just a teenager when he launched the club to bring the dockland community together and keep other teenagers out of mischief.

That was seven years ago. Now, at 25, he uses his own money for projects involving teenagers like the giant mural in Wapping during the first Covid lockdown as a thank you to the NHS.

Nahimul set up workshops on Islamophobia, extremism and hate crime, while also working during the holidays to make sure children normally getting school meals have food at home in the break.
But the club in Cinnamon Street began to sink into debt, with most members being from poor backgrounds who didn’t have the means to pay subscription fees. There was no revenue coming in.

So he used his own money to keep the club buoyant.  He also campaigned for public donations and often went cap-in-hand to businesses, knocking on doors and calling at shops around Wapping and Shadwell.

His efforts paid off and today he has 50 volunteers helping him with a club membership that has soared to 150.

Nahimul grew up in an overcrowding household and didn’t have an easy start, living in a neighbourhood of deprivation and crime, but he defied the odds for himself and the young  people of Wapping.

He is one of the 50 “extraordinary people” receiving the British Citizen medal in 2020, who make an impact on society who might otherwise be overlooked.#eastlondonadvertiser