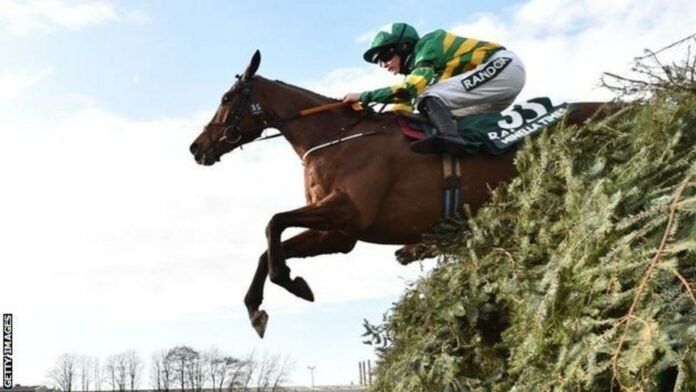 Rachael Blackmore made sporting history by becoming the first female jockey to win the Grand National with victory on Minella Times at Aintree.

Any Second Now was third, with Burrows Saint fourth.

The 173rd running of the world’s most famous steeplechase provided a story for the ages as Blackmore won in the colours of owner JP McManus.

Blackmore had already achieved a landmark success at last month’s Cheltenham Festival when becoming the first woman to be the meeting’s leading jockey.

She demonstrated perfect poise and timing to guide Minella Times expertly round the 30 fences over more than four and a quarter miles for victory by six and a half lengths.

The closest a female jockey had previously come to winning the race was Katie Walsh on Seabass in 2012 when she finished third.

“I cannot believe it,” Blackmore said. “He was a sensational spin. It is unbelievable.”

There were no spectators at the Merseyside track because of Covid-19 protocols, but the historic moment was not lost on the jockeys, trainers and owners in attendance who cheered the pair back into the winner’s enclosure.

The 1-2 for De Bromhead sealed his own remarkable story, having won the Champion Hurdle, Champion Chase and Gold Cup at Cheltenham.

One of the 40 runners, The Long Mile, was euthanised after suffering an injury while running on the flat between fences. It was the second equine fatality in eight editions of the race since safety changes were introduced in 2013.

Jockey Bryony Frost was taken to hospital after being unseated from her mount Yala Enki.

The Tigers are burning bright