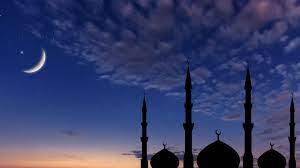 The first day of Ramadan will be on Tuesday, Saudi Arabia’s Supreme Court announced on Monday.
The crescent department held a meeting on Shaban 30, according to the Umm Al-Qura lunar calendar, to sight the new moon.
The decision was made following careful review and after a number of witnesses also confirmed the sighting.
The Supreme Court extended its wishes to King Salman, the crown prince, citizens and residents, and all Muslims on the advent of Muslim holy month.
This will be the second year when Ramadan will be observed under coronavirus pandemic precautions.

Only vaccinated or immune worshippers will be allowed to enter the Prophet’s Mosque in Madinah and that pilgrims who perform Umrah at the Grand Mosque in Makkah without a permit during Ramadan will face a hefty fine in a bid to prevent the spread of the virus.
Umrah permits and visit permits for the Grand Mosque and the Prophet’s Mosque will increase operational capacity during the month of Ramadan.

With more than 5 million vaccinated, the order means that more people will be able to attend the holy sites than a year ago.