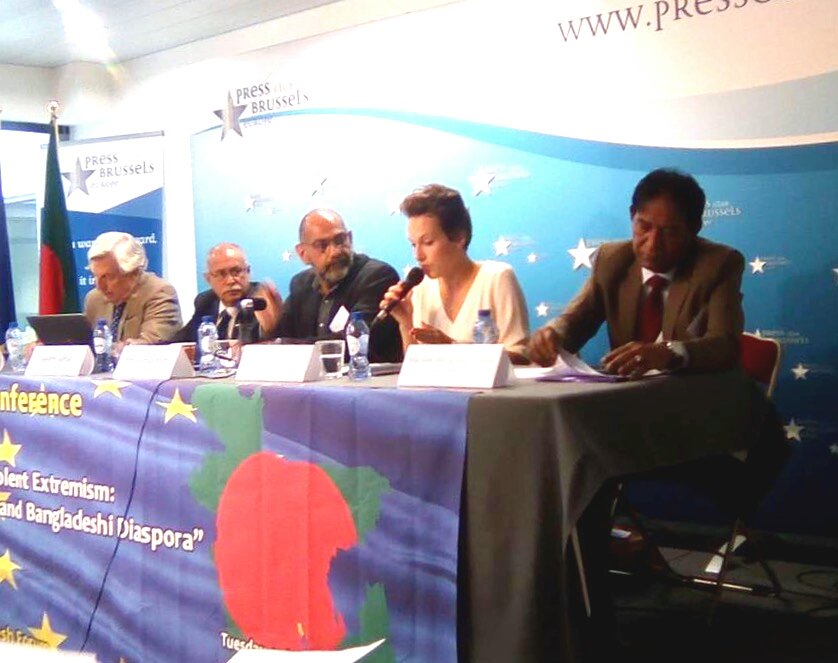 Bangladeshi diaspora platform in Europe ‘European Bangladesh Forum’ held a half a day-long conference on ‘Countering Violent Extremism: Global Context and the Bangladesh Diaspora’ on 11 July at the Brussels Europe Press Club as part of a series of programmes against violent extremism and terrorism in Europe and Bangladesh. Members of European Parliament Geoffrey Van Orden MBE MEP, Conservative Party, UK, Brando Beneifei, Social-Democratic Party, Italy, former Dutch MPs Amma Asante from the Labour Party and Harry van Bommel from the Socialistishe Partij in their presentations urged the Bangladesh government to uphold secularism to counter terrorism and the rise of Islamism. 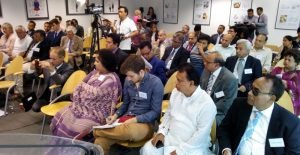 Expressing their satisfaction over the Bangladesh government’s effort to counter terrorism and defusing political Islam, they said the government need to do more to contain radicalization. Radicalization is a global issue and unfortunately Bangladesh’s feet has been gradually dragged into the terror network map. Speakers urged active role of diaspora communities and the civil society to counter extremism and terrorism in Europe as well as home countries in the global south. They focused on social inclusion and integration of the young generation against radicalisation and terrorism.

The event organised by the European Bangladesh Forum (EBF) discussed the impact and policy options to defend secularism and democracy in Bangladesh. The Conference also provided a platform for South Asian, European activists and policymakers to reach a consensus to understand the impact of Islamist terrorism and explore ways to provide assistance to those who are under attack from the Islamists. 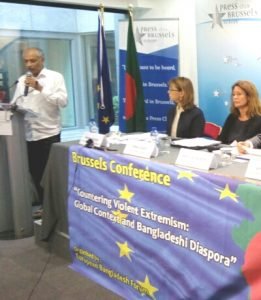 Geoffrey Van Orden MEP who was Guest of Honour in his presentation titled ‘Why is Counter Terrorism so Difficult’ in the context of de-radicalisation said Britain’s relationship with South Asia is ancient and his relationship with the South Asian region has also deepened after he became an active member of the Committee on Foreign Affairs on South Asia in European Parliament. He said in the recent series of terror incidents in the UK, including Manchester, Westminster & London Bridge attacks, fortunately none of the militants were from the Bangladeshi diaspora but many British-born Muslims and Muslim converts have been radicalized and have joined the ISIS holy war in Syria and Iraq.

The former Dutch lawmakers lamented that the Bangladesh diaspora in Europe are victims of discrimination and identity crisis. The politicians said the leaders of Bangladesh diaspora have a role to play in making aware of its community of radicalization, extremism and Islamism which in turn will create an environment of peace building and tolerance among the immigrants in Europe. Emma Achilli, Front Line Defenders, in her paper ‘Bangladeshi Human Rights Defenders at Risk’ raised the issue of insecurity of the bloggers, online activists and secular activists in Bangladesh and demanded the scrapping of ICT Act which restricts freedom of expression that has caused widespread harassment and intimidation of journalists and online activists in Bangladesh. She left the onus on the Bangladesh government for independent investigation of the murders of human rights defenders, secular bloggers and attacks on secular activists and free-thinkers.

Major General (Retd.) Abdur Rashid, Director of Institute of Conflict, Law and Development Studies in his keynote paper ‘Islamic Terrorism in Bangladesh: Progression and Prognosis ‘said the secular fabric and multicultural political stronghold in Bangladesh is considered as potential threat to political Islam. He blamed the Islamist political parties focused on political strategy based on Jihadi Islam, a philosophy drawn from Wahabi segment of Islam and its sub continental version called Moududism.

In the working session titled ‘Impact of Terrorism and what can the Diaspora do’ those who spoke at the conference were Prof Chetan Bhatt, Centre for Study of Human Rights, London School of Economics, Roberta Bonazzi, Head of Counter Extremism Project in Brussels, Thomas Renard, Senior Research Fellow, Egmont – Royal Institute for International Relations, Belgium, on ‘Key trends of terrorism in Belgium & Europe’ and Julie Pernet from European Humanist Federation on ‘The role of free expression and secularism in combating violent extremism in Bangladesh & beyond’.