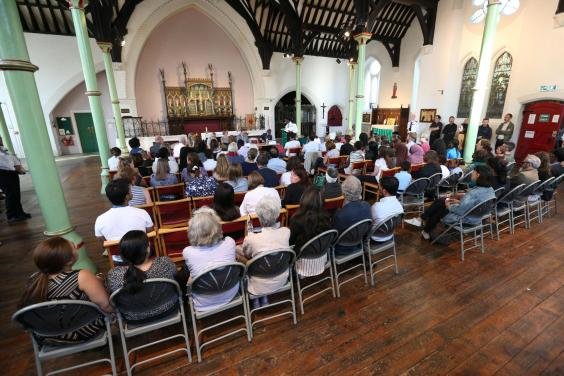 Britbangla24 desk : Angry Grenfell Tower survivors heckled the officer leading the police probe into the fire, calling on him to “arrest someone” at a heated public meeting four weeks on from the blaze.

The meeting was arranged to provide locals with a chance to put questions to key figures leading the investigations.

But it descended into chaos as frustrated residents became angry and upset.

Investigating officer Matt Bonner was quizzed at St Clement’s Church – a short distance from where the blaze happened exactly four weeks ago.

He was met with cries of “arrest someone” as the crowd grew increasingly frustrated by his explanation.

He said the police investigation would “not be quick but it would be thorough”.

Also in attendance was incoming council leader Elizabeth Campbell, who was heckled by one audience member.

Hilary Patel, who is part of community engagement for the Grenfell Response Team, told the locals that they should not be worried about the building collapsing.

“The building has never been at risk of falling down,” she said.

Residents were told that Grenfell Tower could not be covered yet because doing so could change the humidity and other factors inside, which could interfere with the investigation.

One woman, whose questions to the panel were being translated, took the microphone as residents at the meeting began shouting over each other, and asked them: “What truth are you looking for here?”

“They’re just wasting time,” a translator told the room for her.

During the evening, the grieving community held a vigil remembering those lost in the horrific fire.

Hundreds of mourners, many in tears, slowly filed down a wall plastered in tributes in the west London neighbourhood as dusk fell.

Pictures, flowers and handwritten messages are wrapped around swathes of the area, illuminated by candles brought out for the occasion.

At least 80 people died in the inferno on June 14 while hundreds who called the block home were forced into emergency accommodation.#Source#ES#