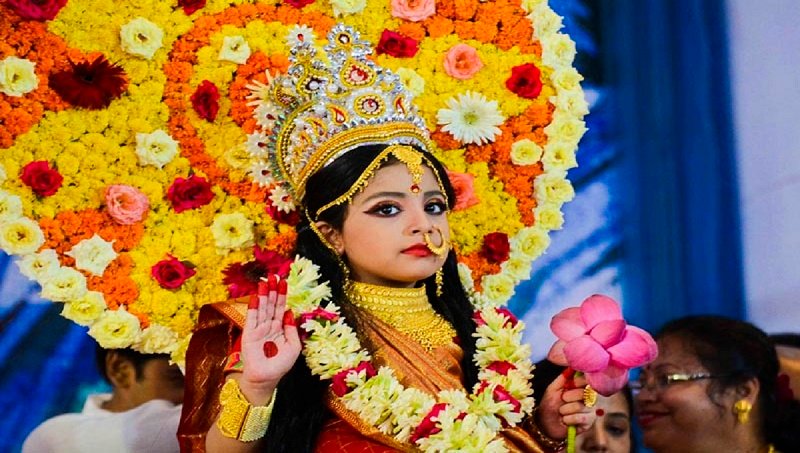 Online Desk :: Hindu devotees are observing ‘Kumari Puja’ on the Maha Ashtami of five-day long Durga Puja across the country on Sunday.

The main attraction of the day is Kumari Puja where a pre-pubescent girl is worshipped as “Mother Goddess”.

Thousands of Hindu devotees thronged Puja Mandaps throughout the country to celebrate in the morning. The celebrations mark the triumph of good over evil.
The worshipped girl symbolises the power that regulates creation, stability and destruction on earth. The goddess is bathed symbolically and dressed for the final battle.

In old days, a buffalo was offered as sacrifice to the goddess. These days, bananas, pumpkins and cucumbers replaced the animal.

Draped in new dresses, a large number of devotees irrespective of ages offered prayers before the Durga, seeking divine blessings for peace, prosperity and welfare of the country and its people.

According to the Hindu religious belief, the world was under threat from demon king Mahishasura, that no man or god could defeat.

To vanquish the demon, Durga emerged from the collective energies of all the gods. Each of her ten arms brandished the deadliest weapon of gods.
On the seventh day (Mahasaptami) of Durga Puja, the goddess started her epic battle against Mahishasura which ended with his death on Bijaya Dashami (the 10th day).