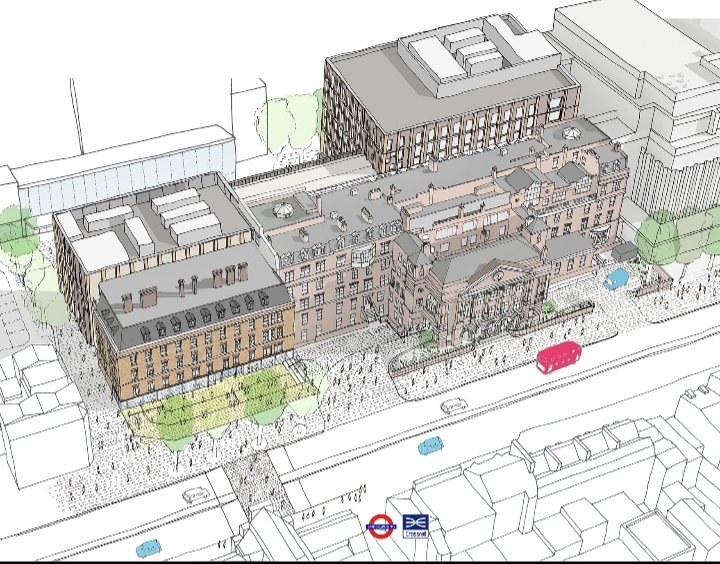 Major works will begin to turn the former Royal London Hospital site in Whitechapel into the borough’s new Town Hall after Bouygues UK was awarded the main works contract.

The construction company has been carrying out preparatory work since August 2018 which has included soft strip of the building’s interior and asbestos removal.

Bouygues UK will now remain on site and move to the main works phase. This will include retaining all the important historical aspects of the grade II listed building, partial demolition of more recent extensions, retaining the façade of the Grocer’s wing and the development of a seven storey block at the back of the main building.

In total, there will be 26,700m2 of civic and office space including a publically accessible ground floor featuring an Idea Store, council chamber, meeting rooms and shared spaces and a café.

The new Town Hall, which is set to open in 2022, will cost £115.4m. This has risen from £105m when the cabinet approved the project last year. The increase has been mainly due to volume of asbestos found inside all the plaster in the ceiling, walls and floors – which has to be removed. Other reasons include inflation and the uncertainty of Brexit which has added to the cost of the main contract. The value of the main contract signedwith Bouygues UK is worth £109.5m.

The project remains good value. The building has been empty since 2012 when the hospital moved out. The council rescued it and pledged to retain its original features.

The move will save the taxpayer money as the council estimates to recoup £78m from the sale of council buildings that will no longer be needed once staff have moved to the new Town Hall.

After eight years the council will be saving public money compared to current arrangements as it will avoid the need to pay £5m a year to occupy the current Town Hall at Mulberry Place.

“We are delighted to have signed a contract with Bouygues UK to deliver a new Town Hall for Tower Hamlets.

“This will be one of the most exciting projects in London. We have been able to rescue one of our most famous buildings so that it can be enjoyed by future generations not just for its history, but for the opportunities it will provide our residents.

“It will be a building for everyone to use. A place to get things done quickly with council, housing and health services under one roof, meeting rooms and spaces for the public and all in one of the best connected sites in London.

“The project remains value for money because of the benefits it will bring and the money it will save compared to now. Asbestos was widely used as a building material historically, but it was only when we did the preparatory work that we could understand the full scale of it. ”

“We are very proud to have been awarded the main works contract for an historic building that will play such an important role for Tower Hamlets. Combining sensitive restoration with the creation of new, high quality buildings which complement the Town Hall’s grade II listed heritage, will create a fantastic working environment for council staff and the wider community.”

Opening in 2022, the new town hall will be part of the Whitechapel Vision – one of London’s largest regeneration projects. It includes a new £300m life sciences campus, seven new public spaces, 3,500 new homes and 5,000 jobs. Queen Mary University and Barts NHS Trust are nearby and the council will also be opening a new employment and education hub in the area.

The building will be in the most accessible part of Tower Hamlets. Situated next to the new transport hub in Whitechapel, it will be served by four different train and tube lines including Crossrail, along with bus and cycle routes.

The consolidation of council buildings will mean that around 700 new homes can be built on former council office sites – 35% of which will be affordable.

Other community benefits include: