Eid was celebrated at the end of a long month of fasting as a joyous festival though the UK has witnessed a number of terror incidents resulting in deaths of innocent lives. 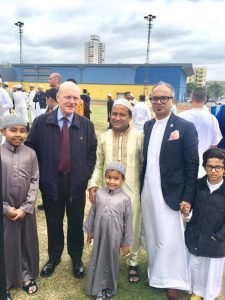 There were fears and anxiety but Prime Minister Theresa May’s Eid message was welcoming for Muslims. Britain celebrated Eid al-Fitr on Sunday, June 25th, in strict security across Britain, by more than 3 million Muslims in Britain. It was a sunny day as Britain’s Muslims celebrated Eid across the country. 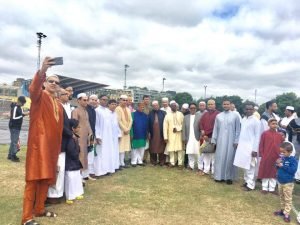 Unfortunately, an accident dampened a little bit of fun. Although Eid was celebrated in Britain through stringent security, six people including 3 children, were seriously injured in a car accident in Newcastle. A 42-year-old Muslim woman, while driving, lost control and drove into an Eid congregation in the park. Of the wounded 1 child’s condition is serious. The BBC initially described the news as an attack, but later corrected it as an accident. Police arrested the woman in this incident. The police are investigating if was simply an accident or there was any other reason behind the incident. Brit Bangla first published the news. 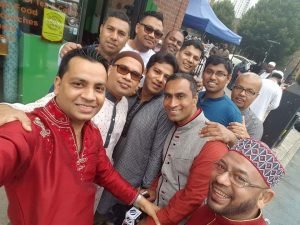 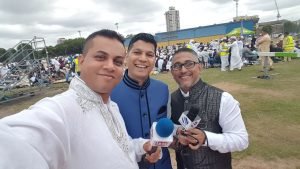 ‘Eid in the Park’, was held at 9:30 am at the initiative of Eid in the Park Committee, organised by Tower Hamlets Council, charity organisation Human Appeal and Redcoat Resident Forum in Mile End Park, East London. Sheikh Abdur Rahman Madani led the Eid prayer. Long before the Eid Jamaat started, Tower Hamlet’s Executive Mayor John Biggs was present in the park. Council Speaker Sabina Akhter, Deputy Speaker Ayas Miah, London Bangla Press Club President Syed Nahas Pasha, Secretary Mohammed Jubair also attended the prayer. They exchanged Eid greetings with the devotees. Former Cllr Abdal Ullah, one of the members of Eid in the Park Committee, told Brit Bangla, that Eid Jamaat is getting bigger day by day. People’s participation is increasing every year. Eid in the Park was stopped during the previous Mayor Lutfur Rahman’s tenure. It was re-launched after John Biggs was elected. A member of the Eid celebrations committee & Convenor of Redcoat Resident Forum Akhlak Ahmad said, ‘Eid-ul-Fitr congregation was arranged in broad daylight in the Mile End park, in the past few years with the help of the community’. He was impressed by the spontaneous participation of people in Eid congregations. He said, about eight to nine thousand men, women, youth and children – participated in this year Eid in Park. 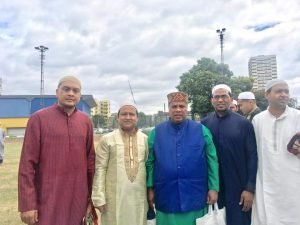 There were various media outlets at the event. LB 24 TV broadcasted live Eid congregation and messages of worshippers taking part. Shah Yousuf, of LB TV, said, ‘Our priority was to show the spontaneity of the people who came to pray in the park for everyone to see’. The President of the London Bangla Press Club Syed Nahas Pasha said, ‘The event was joyous and this initiative is very positive. Hopefully, if the weather is favourable, then such arrangements will continue every year’. When asked about feelings, Brit Bangla Editor Kamal Mehdi said, ‘the joy of performing Eid prayers in the open ground is different.’ He offered Eid greetings to all Muslims of Britain. 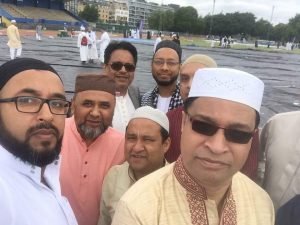 It is to be mentioned that apart from Mile End Park, Eid congregations were held in the open ground in different cities of the country including Ilford’s Valentine Park and Birmingham.