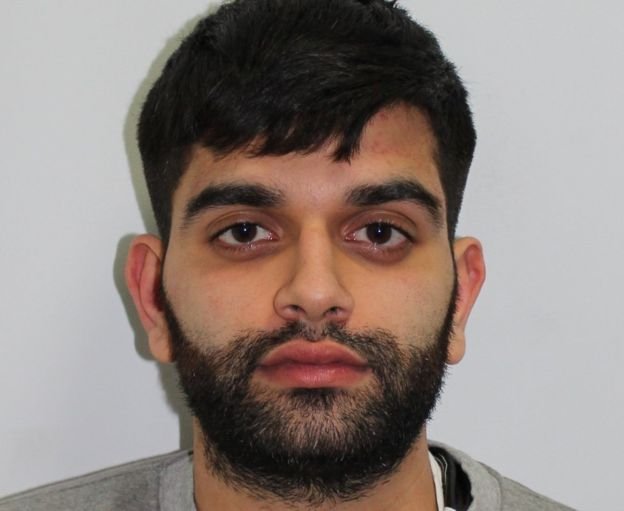 A student who made hundreds of thousands of pounds blackmailing pornography website users with cyber attacks has been jailed.

Zain Qaiser from Barking, London, used his programming skills to scam visitors to pornography sites around the world.

Investigators have discovered about £700,000 of his profits – but his network may have made more than £4m.

Qaiser, 24, was jailed for more than six years at Kingston Crown Court.

The court heard he is the most prolific cyber criminal to be sentenced in the UK.

Judge Timothy Lamb QC said: “The harm caused by your offending was extensive – so extensive that there does not appear to be a reported case involving anything comparable.”

His jail sentence of six years and five months is a second major success for the National Crime Agency (NCA) after the jailing earlier this year of a British man who broke an entire nation’s internet.

Qaiser was first arrested almost five years ago – but the case has been delayed because of the complexity of the investigation and mental health concerns.

Initially working from his bedroom at his family home in Barking, Qaiser began to make money through “ransomware” attacks when he was only 17 years old.

This is a form of attack in which a computer is hijacked and frozen by a small piece of software until the user pays a fee for its release.

Millions of these attacks occur every day around the world – the most well-known example in the UK is the “Wannacry” attack on the NHS in 2017.

Qaiser contacted the Russian controller of one of the most potent attack tools and agreed a split of his profits if his planned blackmail operation was a success. In turn, he forged contacts with online criminals from China and the USA to help shift the cash.

Over 18 months, the teenager posed as a legitimate supplier of online promotions and booked advertising space on some of the world’s most popular legal pornography websites.

But each of the adverts that was promoted on the websites contained a malicious tool called the “Angler”.

Any visitor to the adult site who clicked on one of Qaiser’s fake adverts would trigger the download to their own computer of the attack kit.

If the home computer was not protected with up-to-date anti-virus software, the Angler would search for vulnerabilities and, if possible, deliver the “ransomware” that seized control of the machine.

It immediately splashed a full screen message to the user, purportedly from the FBI and other law enforcement agencies, accusing the user of breaking the law – warning them they faced up to three years unless they paid an immediate fine equivalent to roughly $200 or £100.

“Out of fear of embarrassment from friends or family members discovering they had accessed pornography, many users paid the ransom,” prosecutor Joel Smith told Kingston Crown Court.

To make thing worse, the warning page claimed that police had captured webcam images of the user during their visit to the adult website – and gave a deadline for the payment to be made.

The National Crime Agency says that it’s impossible to know exactly how many people paid up – but forensic data has revealed Qaiser’s operation was enormous.

In a sampling exercise, the NCA calculated just one of the fake adverts appeared on 21 million web browsers every month – including 870,000 appearances on pornography pages accessed in the UK.

In turn, the attack kit would have been downloaded on approximately 165,000 PCs. Some 5% of those – about 8,000 users – were likely to have fallen victim to the ransom demand.

Financial investigators have established that Qaiser’s operations shifted at least £4m through a string of crypto-currency platforms – although a great deal of these profits were ploughed back into the scam by buying more and more advertising space.

The NCA’s financial investigators identified that the former computer sciences student had personally received almost £550,000 by the time of his arrest.

During the lengthy investigation while he was on bail, detectives found he received a further £100,000 as his associates moved funds through Gibraltar and Belize to a UK-accessible online account.

Qaiser is believed to have more stashed in online crypto-currencies because he revealed in online chats that he has further “offshore savings”.